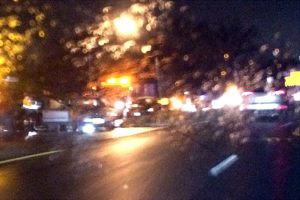 The left lane of northbound Route 110 approaching Marshall Drive was shut down by Arlington County Police during the evening rush hour after nearly a dozen vehicles became disabled, blocking traffic with flat tires caused by what officers described as a “crater” in the road.

As of 7 p.m. the lane was still blocked and traffic was backed up almost to the Pentagon. VDOT crews were on scene making emergency repairs.

A local TV station was also on scene, interviewing the stranded motorists as they changed tires or awaited roadside service.

Update at 8:30 p.m. — The pothole has been repaired, at least temporarily, and the lane has reopened.