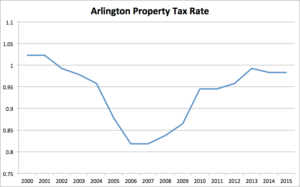 Arlington’s property tax rate can stay the same or can decrease, but won’t increase this year.

The Arlington County Board on Tuesday night voted unanimously to advertise a property tax unchanged from last year — $0.996 per $100 of accessed value ($0.983 base tax plus a $0.013 stormwater district tax).

That means that Arlington’s tax rate can only go down when the County Board approves a final Fiscal Year 2017 budget in April. County Manager Mark Schwartz is recommending a half cent reduction in the tax rate.

The average Arlington homeowner will still pay more in taxes than last year, thanks to a 3 percent rise in property assessments. Some county fees are also expected to rise, including a $36.24 per year increase in the household solid waste rate due to the implementation of year-round yard waste collection.

The county press release about the Board’s action and the County Manager’s budget, after the jump.

The Arlington County Board today voted unanimously to advertise a property tax rate unchanged from the Calendar Year 2016 tax rate of $0.996 per $100 of assessed value, including the $0.013 stormwater sanitary district tax.

“The Manager presented a Proposed Budget that included a recommended half-cent reduction in the property tax rate,” said Arlington County Board Chair Libby Garvey. “I believe this Board wants to provide that tax relief, however, we are choosing to keep some flexibility while we watch the economy, listen to the public in March and consider potential changes to the Manager’s Proposed Budget. The Board is acutely aware that it cannot adopt a higher tax rate for Calendar Year 2016 than what we advertise, but we can adopt a lower tax rate.”

The Board will hold public hearings on the budget, including the proposed tax rate and proposed fees, in March and adopt the budget on April 19. The 2017 fiscal year (FY) begins July 1, 2016.

The Board voted to advertise the rate after County Manager Mark Schwartz presented his proposed $1.19 billion budget for Fiscal Year (FY 2017). Excluding the transfer to Arlington Public Schools (APS), the County operations budget totals $727.5 million, a 2.7 percent increase over the adopted FY 2016 budget.

The proposed budget includes funding obligations for Metro, debt, employee compensation increases, and contractual increases, for affordable housing (AHIF) and housing grants. The transfer to APS (Arlington Public Schools) is $464.9 million, a $13.2 million increase over the adopted FY 2016 budget, which includes an increase of $10.8 million in ongoing funding and $2.4 million in one-time monies.

The Board also voted to advertise public hearings for proposed fee changes including:

For more information, visit the FY 2017 Budget webpage on the County website.

Members of the public wishing to speak at either meeting may sign up in advance, by filling out a public comment speaker slip, or on the day of the hearing, by obtaining a slip at the Information Desk in the  Board Room foyer. To share your thoughts on the Proposed Budget, visit the County website.

Both hearings will begin at 7 p.m., in the County Board Room, 2100 Clarendon Blvd., Arlington, VA. The County Board will adopt the Budget on April 19.