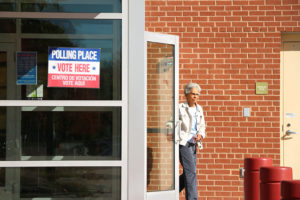 Arlington County has run out of preprinted, state-issued Republican presidential primary ballots due to much higher-than-expected GOP voter turnout.

County elections officials had to begin photocopying the ballots in order to keep up with voter demand, Arlington Registrar Linda Lindberg confirmed to ARLnow.com. Ballot photocopies are legal, carry the Arlington seal and are authorized by the election board, but cannot be machine scanned and must be counted by hand, Lindberg said.

“No precinct has been out of ballots at any point in time,” she noted, dispelling rumors to the contrary.

In the absence of paper ballots, Lindberg said polling places also have the option of allowing voters to use an electronic ballot marking device, intended for those with disabilities. Ballots cast with the device are machine scannable, but there’s only one device per polling place.

As of 6:30 p.m., elections officials reported that total turnout had reached 38 percent of registered voters, with 24 percent voting in the Democratic primary and 14 percent voting Republican. That’s double the final GOP turnout in Arlington in 2008.

Polls close in Virginia at 7 p.m., but major Metro delays on the Blue, Orange and Silver lines tonight may keep some late voters from casting ballots.