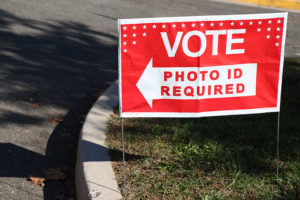 Arlingtonians voted overwhelmingly for Hillary Clinton and Marco Rubio in a primary election that saw Republican turnout more than double since 2008.

Overall turnout was up — 42 percent this year to 40 percent in 2008. Fifteen percent of registered Arlington voters cast a ballot in the GOP race, while 27 percent voted in the Democratic race. That compares to 7 percent GOP and 33 percent Democratic turnout in 2008.

Tonight’s unofficial Arlington results on the Democratic race were:

Statewide, Clinton carried the state 64.3 percent to 35.2 percent for Sanders. On the Republican side, Trump won in Virginia with 34.8 percent of the vote to 31.9 percent for Rubio and 16.9 percent for Cruz. Across all Super Tuesday states, Clinton and Trump claimed enough victories to retain their frontrunner status in the presidential race.

On a night when Arlington ran out of preprinted GOP ballots due to unexpectedly high Republican turnout, there was speculation that many Democrats crossed over — Virginia has an open primary — to vote for a “non-Trump” candidate.

@HotlineJosh @ARLnowDOTcom anecdote is true; i know dems who crossed to rubio

Half a dozen folks at my NoVa polling place today around 1pm…ALL asked for R ballots. Unusual for the area. https://t.co/10uuYs5hy6

Most informed strategic electorate in the country is in NoVA https://t.co/Snba0WE9JM

Enthusiasm among local Republicans also appeared to have driven the high turnout.

Huge turnout at our #SuperTuesday results watch party…and the night is still young! Tweet us if you're here! pic.twitter.com/BEw9jifCRl

After the jump, the Arlington County Democratic Committee statement, from party chair Kip Malinosky, on the primary result.

Virginia Democrats have now had their say and we congratulate Hillary Clinton on her victory in today’s primary! And we thank Bernie Sanders as well for continuing to run a strong, issue-focused campaign.

As Democrats, we can be extremely proud of our candidates. Both Hillary Clinton and Bernie Sanders are shining a spotlight on the issues that really matter — issues like income inequality, climate change, health care, and education. And they are offering positive ideas to help keep our country moving forward. Their inclusive, welcoming vision for America inspires us all to be the best we can be. With strong candidates like these we can’t help but be excited for November!

But Virginians also voted overwhelmingly today for Donald Trump and he is well on his way to winning the Republican nomination for president. With his victories tonight, Donald Trump is increasingly likely to be the GOP nominee.

To that we say, game on! The contrast between our progressive candidates and Mr. Trump could not be clearer. His views are far outside the mainstream of American politics. While our candidates appeal to our best hopes and dreams, Mr. Trump appeals to America’s baser fears. With a message consistent with America’s real values, our Democratic candidates are generating excitement without resorting to insults, dirty tricks, fear tactics, or reality TV-style sensationalism.

Over the next six months, we will have our work cut out for us. We cannot take this election for granted. We are going to fight for every vote. But we know this: Whether our standard bearer is Hillary Clinton or Bernie Sanders, we are ready to win in November! Tonight, it feels good to be a Democrat!