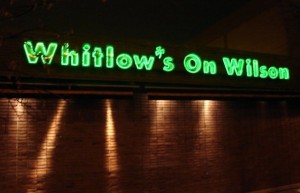 (Updated at 5:55 p.m.) Whitlow’s is celebrating its 20th anniversary in Clarendon with two nights of free events.

To start, the local watering hole at 2854 Wilson Blvd will hold a release party for a new signature beer tonight.

Created as a collaboration with Devil’s Backbone Brewing near Lexington, Va., the beer is being called the “Whitlow’s Good Time IPA.” It’s a moderately hoppy beer that’s 4.7 percent alcohol by volume, according to Whitlow’s manager Jon Williams.

On Saturday, the band Virginia Coalition will play a free show at Whitlow’s. “VaCo” used to play at the bar every Tuesday night during the early 2000s before getting big.

Williams reflected on Clarendon’s evolution since Whitlow’s first opened. (Before coming to Clarendon in 1995, Whitlow’s was a greasy spoon and bar in D.C. It first opened there in 1946.)

“The neighborhood has changed,” he said. “The condos got built and the demographics have gotten younger. And obviously there’s a lot more competition now.”

Despite the competition, Whitlow’s has managed to stay busy, attracting both younger bar-goers and long-time “neighborhood folks.” Williams chalked that up to Whitlow’s not straying far from its roots.

“We don’t try to be something we’re not,” he said. “We’re not pretentious at all and we just stay true to what we started out as — a neighborhood gathering spot — and I think people appreciate that. It’s a gathering place people who have lived here a long time know they’re pretty much guaranteed to run into someone they know.”

The most recent major change: the opening of a new rooftop bar, Wilson’s on Whitlow’s, a few years back.

Asked what the future holds, Williams wasn’t sure.

“We’re going to keep chugging along and keep coming up with silly ideas,” he said. “You have to keep doing stuff to stay fresh and current in people’s minds. That’s the biggest challenge. We’re going to get through this weekend and put on the thinking caps again.”