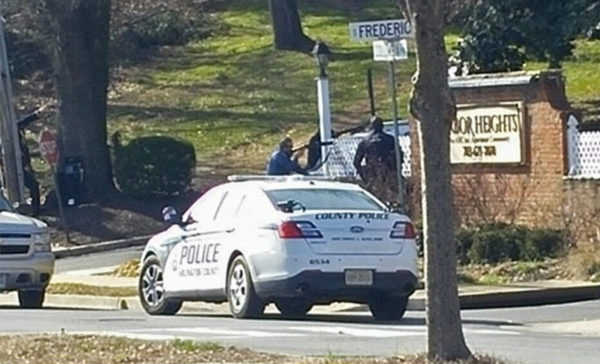 Update at 4:15 p.m. — The man who punched a wall was treated for a possible hand injury. Police believe that sound may have been mistaken for gunshots.

Update at 3:45 p.m. — The scene has been cleared, no evidence of a shooting was found and Columbia Pike is reopening, according to scanner traffic.

A Sheriff’s Office spokeswoman said the earlier crash on S. Buchanan Street involved a deputy who was responding to the shots fired call. Neither the deputy nor the other driver involved — who was issued a traffic citation — was seriously injured, said Maj. Susie Doyel.

Update at 2:40 p.m. — Two residents have exited the building and told police that they were having an argument in which one half of the couple punched a wall, according to scanner traffic. Police are still taking a cautious stance and maintaining a perimeter around the building. Also, a parent says that nearby Kenmore Middle School is in “secure the school” mode, possibly as a result of the incident.

Arlington County Police have shut down Columbia Pike in the area of S. Frederick Street, just west of the Arlington Mill Community Center, while officers investigate reports of shots fired inside an apartment building.

The shots fired calls came from residents in an apartment building, the Arbor Heights Apartments, on the 800 block of S. Frederick Street. One resident told police he or she heard gunshots and then saw people running from the building.

In addition to the closure of Columbia Pike, S. Frederick Street is closed between the Pike and 8th Road S.

Police have staged outside the apartment complex but have not entered it yet.

Meanwhile, police and medics are responding to a report of an accident with multiple injuries on the 900 block of S. Buchanan Street, several blocks away from the possible shooting scene.