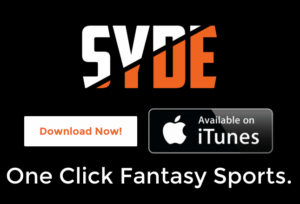 Based in Arlington and D.C., Syde is an early-stage fantasy sports startup that’s hoping to make daily fantasy sports betting more fun and accessible for casual fans. While the company is optimistic about its future, for now it looks like that future will not include customers in its home state of Virginia.

Legislation just passed by the Republican-controlled Virginia General Assembly and signed into law by Democratic Gov. Terry McAuliffe will formally legalize and regulate paid fantasy sports games, declaring them to be games of skill rather than chance. Virginia is the first state to pass such a law, but there’s a catch: fantasy sports companies now have to pay an initial $50,000 fee in order to legally serve customers in Virginia.

Syde co-founder Ryan Huss says the fee is cost-prohibitive for a startup like his. While the company will maintain its largely home-based presence in Arlington, the law will bench the Virginia-based players they’ve signed up.

Speaking to ARLnow.com from South by Southwest in Austin, Texas, Huss said the company is talking to lawyers but expects that it will be game over for Virginia players “probably in the next couple of months.” The company’s efforts to bring awareness to the issue via Twitter were too little, too late, as the General Assembly wrapped up its marathon session.

“The most concerning thing for us is that this is going to rule out anybody but the biggest two players” — industry leaders FanDuel and DraftKings — “and maybe some media companies,” said Huss. 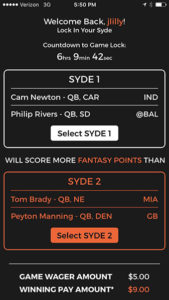 We profiled Syde in November and it has since grown to a few hundred active users while purposely staying somewhat under the radar. Two weeks ago, satisfied that a market exists for its product, Syde launched the “2.0” version of its app, which allows hassle-free daily fantasy play for all four major U.S. sports, instead of just football. Entry fees range from $5-100. Someone who pays a $5 entry fee can win $9 in a head-to-head matchup.

Next up for the company: cranking up its bootstrapped marketing efforts, pitching investors and reincorporating as a Delaware corporation, as many growing companies do.

“Our plans are to continue to get users on the current product and add features with user feedback and grow with demand,” Huss said. He’s hoping that other states don’t go the same route as Virginia, creating big barriers to entry for small companies.

“Given how complicated the current daily fantasy sports products are right now, I think the casual sports fan is really eager to see innovation and new products,” he said. “Not everybody is a stats geek… and most casual sports fans never will be. That’s why this legislation is so concerning. Innovation is desperately needed here but [this law] is only allowing the duopoly to exist.”