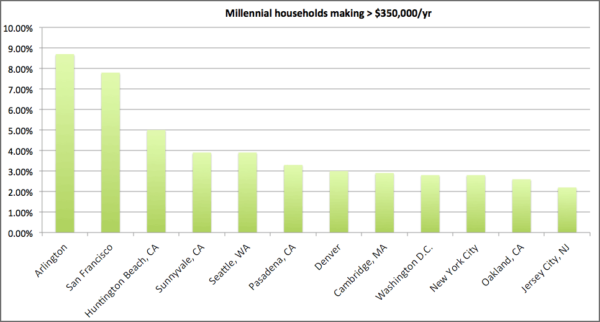 That’s according to the real estate website Zillow, which just compiled a list of places that are home to the most affluent Millennials in the U.S.

“Not everyone in the 22-34 age group is scraping by,” Zillow says. “Whether they made their money lobbying lawmakers at the Capitol or cashed in on a tech IPO, rich millennials are clustered in cities where there are lots of high-paying professional jobs.”

(A “household” counts both singles and the combined income of a couple or group of people living in the same house or apartment.)

San Francisco, which has almost double the median home value and rent of Arlington, is second on the list with 7.8 percent of Millennial households making more than $350,000. Another California city, Huntington Beach, in the L.A. area, is third with 5 percent.

END_OF_DOCUMENT_TOKEN_TO_BE_REPLACED

More Stories
Morning NotesMan Beat Up and Robbed Across from School, Cathedral