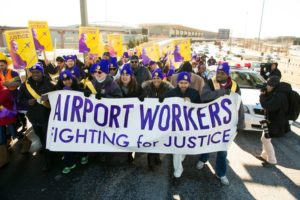 Updated at 3:55 p.m. — Workers “decided to postpone the planned work stoppage in light of the horrific tragedy which unfolded today at the Brussels Airport and subway,” strike organizers say.

“DCA’s contracted airport service workers are excluded from the airport’s living wage law and earn as little as $3.77 plus tips with few meaningful benefits,” the 32BJ SEIU labor union said, in a press release.

Workers will be striking in the B and C terminals of the airport, 32BJ SEIU said. On Wednesday, from 12:30-1:30 p.m., workers will hold a rally at Gravelly Point Park, near the airport.

The action follows a protest by DCA airport workers in January that blocked traffic near the Martin Luther King, Jr. Memorial in MLK Day.

After the jump, the full press release from 32BJ SEIU.

Airline-contracted wheelchair attendants, skycaps, baggage handlers, checkpoint agents and cabin cleaners at Reagan National Airport, will go on a first-ever strike Tuesday night to protest charges of unlawful termination, threats of retaliation and interrogation committed by their employers, Eulen America and Airport Terminal Services Inc., who service Delta and American Airlines. The strikes are taking place amidst record profits for the aviation industry while many airport workers continue to live in abject poverty. Last year alone airlines raked in more than $23 billion in profits. In addition, Virginia Delegate Alphonso Lopez, SEIU President Mary Kay Henry and Rev. Graylan Hagler will speak at a rally with workers and allies on Wednesday.

D.C. is one of nine cities including Seattle, Chicago, Boston, New York City, Newark, Philadelphia and Fort Lauderdale, where airport workers are striking to protest unsafe working conditions and against their employers interfering with their right to join together to demand a minimum of $15/hr. DCA’s contracted airport service workers are excluded from the airport’s living wage law and earn as little as $3.77 plus tips with few meaningful benefits.

Airport workers across the country are concerned that inadequate safety and health standards, along with low wages, high turnover, insufficient or lack of training at our airports not only put workers in danger but also undermine safety and quality of service. A December 2015 GAO report – noting health and safety violations by contracted aviation services employers – supports workers’ concerns that aviation service providers do not ensure that workers have the necessary training and protective equipment.

Recent studies have shown that airport workers who provide critical services such as assisting disabled special needs passengers and who perform security functions and maintain public health standards are too often poorly compensated, receive little training and have few incentives to stay in their jobs over the long-term. These Health and safety experts believe these conditions put travelers and passengers at elevated risk.

Last month, actor and anti-poverty activist, Danny Glover investigated conditions facing contracted DCA service workers and document injustices to confront airline contractors over alleged surveillance and interrogation of workers. Glover also spoke with workers about struggling on poverty wages and signed a pledge of support for their fight for $15/hr and union rights.

DCA workers have been inspired by other airport workers actions and their progress. Because of employers such as Eulen and ATS continued crack down on workers, from surveillance to intimidation tactics, workers are fed up and joining other contracted-out service workers across the nation to stand up and demand better wages and training, to organize free of harassment and coercion, and most of all, dignity and respect on the job.

Airport workers have made progress in their journey for justice. By sticking together, speaking out for change, fasting and going on strike, they have won wage increases in Los Angeles, New York City, Newark, Minneapolis, Boston, Philadelphia, and Fort Lauderdale. More than 70,000 airport workers nationwide have either received wage increases or other improvements, including healthcare, paid sick leave and worker retention policies.

The strikes and rallies are part of a national push by airport workers who are uniting with other underpaid workers in the Fight for 15 movement to do whatever it takes to win at least $15/hr and union rights for every airport worker so they can provide for their families and better care for the hundreds of millions of passengers who rely on them to travel safely.

With more than 155,000 members in 11 states, including 17,000 in the D.C. Metropolitan Area, 32BJ SEIU is the largest property service workers union in the country.