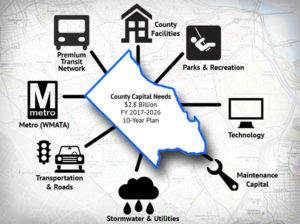 Arlington voters may be asked to decide whether the county should spend tens of millions of dollars on Metro, maintenance, parks and recreation and other capital improvements this fall.

County Manager Mark Schwartz presented his proposed FY 2017-26 Capital Improvement Plan earlier this week. The County Board will now hold a series of work sessions and public hearings before final adoption of the plan and the November slate of bond referenda by the Board on July 19.

The CIP includes $177 million of proposed bond referenda for November, for the following projects:

Schwartz’s plan is notable both for what it contains and what it doesn’t contain. For one, the plan asks for no additional funds for the proposed, scaled-down Long Bridge Park aquatics and fitness center.

The plan is being billed as a balance of new capital spending projects and maintenance that stays within the limits needed to preserve Arlington’s AAA bond rating, at a time when Arlington Public Schools is in the midst of major construction projects to keep up with rising enrollment. The CIP assumes annual county revenue growth of 2-3 percent, which officials say is a conservative projection.

This is the first Capital Improvement Plan since the cancelation of the Columbia Pike/Crystal City streetcar project. The plan “reallocates money from the cancelled project into a premium [bus] transit network for Columbia Pike that eventually will offer a one-ride trip from the west end of the Pike to Potomac Yard.”

“Our priorities are clear,” Schwartz said in a press release. “We will fund a premium transit network for Columbia Pike that will bring many of the benefits of a streetcar, at less cost, to that heavily traveled corridor. We include substantial funding for Schools capacity needs and the Superintendent’s proposed CIP priorities. We also will address our community’s growing need for recreational facilities and open space by replacing the aging Lubber Run Community Center and moving forward with the Long Bridge Park Aquatics and Fitness Center and surrounding 10 acres of parkland within existing funding. We also will fund the design of a new fire station to replace Lee Highway’s obsolete Fire Station No. 8.”

“It includes more than $1.3 billion in funding for transportation over the next 10 years. Some of that money would be used to expand the County’s successful Arlington Transit (ART) bus system, adding 25 buses to the 65-bus fleet by FY 2022. Another $421 million is proposed for water-sewer infrastructure funding over the next 10 years. Also included is funding to acquire the Buck property, on N. Quincy Street, and $6 million to build an on-line payment portal and supporting systems.”