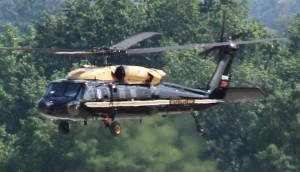 Rep. Don Beyer (D-Va.) is continuing his fight against helicopter noise in the D.C. area.

Following up on frequent resident complaints, last month Beyer added an amendment to the National Defense Authorization Act “to study changes to the region’s helicopter flight routes, operating procedures, and even the types of helicopters flown in the national capital airspace to mitigate the effect of noise on the region’s neighborhoods.”

A letter sent today to Defense Secretary Ash Carter by Beyer and other local members of Congress notes that the bill directs the Defense Department to work with the FAA “to develop recommendations for the reduction of military helicopter noise, taking into account the operational needs of the military while offering residents a much-needed reprieve.”

The letter expresses concern about the noise while offering “to support your outreach to communities to ensure the DOD and the FAA receive the most comprehensive information regarding the effects of military helicopter noise.”

We write concerning the increasing volume and frequency of military helicopter operations in the National Capital Region, which negatively affect our constituents.

This disturbance to residential areas is a constant source of concern and complaint from many constituents, even when the helicopters adhere to flight procedures and routes. The noise and vibrations created by these trips can be alarming, especially when passing so close to residential areas at the low altitude dictated by the Federal Aviation Administration (FAA).

According to the FAA, at least 144 helicopter operations take place each day in the National Capital Region, of which 75 percent are Department of Defense (DOD) helicopters. Especially concerning is the addition of the V-22 Osprey to the local residential airspace.

The National Defense Authorization Act for Fiscal Year 2017 (NDAA) recently passed the United States House of Representatives. As you may know, the NDAA included language directing the DOD, working with the FAA, to reevaluate air traffic control, air space design, airspace management, and the types of aircraft in operation, to address helicopter noise problems.

Thank you for your consideration of our concerns. We, and our constituents, look forward to receiving your report as soon as possible.