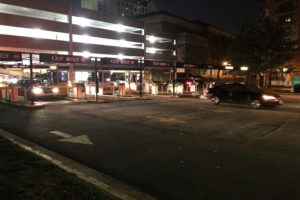 Two men arrested for a shooting outside the Fashion Centre at Pentagon City mall have been sentenced after entering plea agreements.

Reginald Dana is slated to serve three years in prison after entering an Alford plea for attempted malicious wounding and use of a firearm in the commission of a felony. Calvin Pelzer will serve a year in jail after pleading guilty to felony eluding and accessory after the fact, according to prosecutors.

The December 2015 shooting was described as a road rage incident at the exit of the mall’s parking garage. Police say Dana fired a gunshot in the air out of frustration with a driver who was having problems using a credit card at one of the gates. Pelzer, the driver, then sped away and tried to elude police who gave chase on I-395. The chase ended near 3rd and F Street NW in D.C., after the two suspects bailed out and started running.

Both men were both 21 years old and D.C. residents at the time of their arrest.