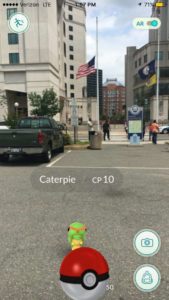 Arlington officials have some seemingly-obvious advice to players of the hot new smartphone game Pokemon Go.

First of all, says Arlington’s Office of Emergency Management, don’t walk into traffic while playing the game. Also, don’t try to play the game and drive at the same time.

Beyond that, OEM and the Arlington County Police Department have other practical advice for game players to remain safe:

“Always be aware of your surroundings. Play with other people, there’s safety in numbers. Tell people where you’re going, especially if it is somewhere you’ve never been. Parents should limit places kids can go. Be considerate of where Pokemon are displayed and don’t trespass on private property.”

Even some public property may be off-limits. There have been recent reports of people playing Pokemon at Arlington National Cemetery (see below).

“In respect for those interred at Arlington National Cemetery, we do request and require the highest level of decorum from our guests and visitors,” Smith told ARLnow.com. “Playing such a game on these hallowed grounds would not be deemed appropriate.”

Saw someone playing Pokemon Go in Arlington cemetery today. Let that sink in…

Keep it classy, Pokemon trainers. Stay out of the Arlington Nat'l Cemetery too… https://t.co/S9kLkONBJL