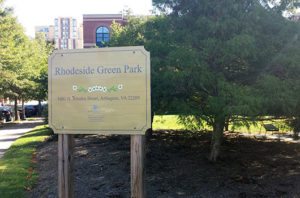 More than 500 people have signed a petition calling for the Arlington County Board to take Rhodeside Green Park in Rosslyn off the list of potential locations for a temporary fire station.

Arlington County originally proposed building the temporary fire station behind the future the H-B Woodlawn school in Rosslyn, but agreed to consider other locations after parents spoke out against the plan, citing concerns about student safety and the loss of open space.

The petition cites concerns about losing “one of the last green spaces we have” in the neighborhood and calls for the County Board to select an alternate location.

On Saturday, July 16, the Arlington County Board voted unanimously to consider the Rhodeside Green Park at the corner of Rhodes Street and Clarendon Blvd. as a location to construct a temporary fire station. This station location would remain in place for at least 3 years while a new fire station is constructed as part of the new school development on Wilson Blvd. next to what is currently Wilson School. The Board plans to take final action at a meeting scheduled for September 24th, 2016. The first time Radnor/Ft. Myer Heights Civic Association (RAFOM) heard Rhodeside Green Park was one of 3-4 possible sites was at the July 16 Board meeting. There was no notification or consultation with the residents of Bromptons Rosslyn Homeowners Association (BARHOA), residents living in apartments and condos near the park, or anyone else impacted. Rhodeside Green was created during development of BARHOA then turned over to Arlington County in 2002 as part of a deal to create green space for our area. We request the Board not stray from the original intent.  Construction of a temporary fire station will displace one of the last green spaces we have in Ft. Myer Heights. We are grateful for the services provided by the Arlington County Fire Department, this in no way diminishes our support and gratitude for what they do for all of us every single day. This petition is about protecting a cherished park that serves as a place for children to play, residents to gather, and for a small part of nature to exist within our over developed neighborhood. We urge the Arlington County Board to remove Rhodeside Green from consideration and select one of the alternate locations under consideration.