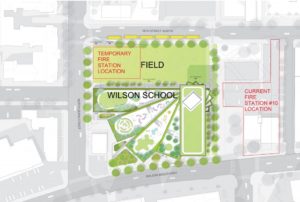 The H-B Woodlawn Secondary Program is gearing up to move to a brand new building in Rosslyn for the 2019-2020 school year, but a new wrinkle in that plan is worrying parents.

On Friday, Arlington County announced that it was collaborating with Arlington Public Schools on a money-saving plan: a temporary fire station will be placed on the school’s field while developer Penzance constructs two new mixed-use buildings next door, on the county-owned site of the current Fire Station No. 10.

The county says the plan will save it $20 million and will save Arlington Public Schools $5 million — thanks to Penzance paying for the parking, the new fire station and a new Rosslyn Highlands Park, adjacent to the development.

“We realize that opening the school without a field will inconvenience students and staff,” County Board Chair Libby Garvey said in a statement. “We chose this site because the parking provided to APS for schools will save a considerable amount of money for the school project, and it is the best location by far for the temporary fire station. We believe that when the project is finally completed, this site will not only be a great new home for H-B and the Stratford Program, but will also provide many, many benefits to our community.”

Members of the H-B Woodlawn Parent Advisory Committee, however, were none too pleased with the idea of opening the school without a field and other factors that could have “an adverse impact on our children.”

In an email to members, the committee urges parents to reach out to County Board and School Board members before each considers approving the plan at their July meetings.

Our apologies for sending this message out on the Friday before a three-day weekend, but we thought it was important to bring this issue to your attention as soon as possible.

The School Board and County Board announced today that they are in negotiations to build a temporary fire station on the planned athletic fields at the new home of the H-B Woodlawn and Stratford programs, at the Wilson site.  This plan is being rushed through with very limited public input and without serious consideration of its impact on students, staff, and visitors, in the name of saving money.  A press release regarding this proposal can be found here: Press Release

Here are suggested points to make in your communications with Board members:

We will keep you informed as we gather more information about this proposal and its potential impact.