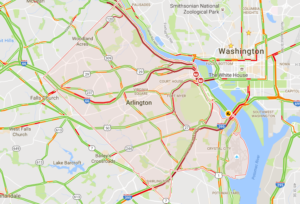 Both drivers and Metro riders are finding a slow go on their way to work this morning.

The trouble started tragically this morning just before 5 a.m., when motorcyclist crashed on the Roosevelt Bridge. The motorcyclist was pronounced dead at a local hospital and the bridge was closed to traffic for a crash investigation.

Route 110 and the GW Parkway have been backed up all morning as a result of the closure. Lanes have since reopened, but residual delays remain.

May be worst Monday a.m. commute of the summer on west side of DC region after crashes on Legion & Roosevelt bridges.

All lanes now reopened but traffic is still impacted throughout County. Allow for extra travel time this AM. https://t.co/PB0STkXvGi

Meanwhile, on Metro, as of 9 a.m. the Yellow Line was only running from Huntington to the Pentagon due to a switch problem causing heavy congestion on the Green Line. Yellow Line riders heading into D.C. are being forced to continue their commute either via the Blue Line or buses.

Metrobuses in Arlington are also experiencing delays, due to the heavy traffic.

4B, 38B: Due to traffic congestion along Clarendon Blvd, buses to Rosslyn/Farragut Sq are experiencing up to 35-minute delays.