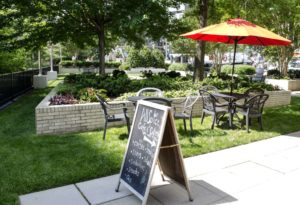 Fox 5 personalities Erin Como, Annie Yu and Tucker Barnes will be broadcasting from Rosslyn as part of its “Zip Trip” morning news feature.

The live broadcast will take place in the small park on the corner of Wilson Blvd and N. Oak Street. Local notables including Arlington County Board Chair Libby Garvey and District Taco co-founder Osiris Hoil will be interviewed, and local restaurants like Barley Mac, Pancho Villa, Heavy Seas Alehouse, AllSpice Cafe & Catering and Bistro 360 will be featured.

The Rosslyn Business Improvement District is encouraging Rosslyn residents and workers to stop by the park during their commute to meet the anchors and, perhaps, appear on live TV.

Rosslyn will be featured on Zip Trip on August 19 when Fox 5 broadcasts live Friday morning from 7 to 11 a.m.

Fox 5 anchors Erin Como, Annie Yu and Tucker Barnes will visit local restaurants and talk about the fun activities going on in the neighborhood.

The Monday Properties’ Park at the corner of Oak Street and Wilson Boulevard (1401 Wilson Boulevard) will be the scene for the live broadcast. Feel free to stop by for a free coffee from Dunkin Donuts and check out the live set! The anchors are excited to meet residents and employees from Rosslyn and may ask you to appear on TV on your way to work.

Special guests during the live broadcast will include Arlington County Board’s Chair Libby Garvey, Co-founder and CEO of District Taco Osiris Hoil, the Happy Whistler and staff from the Art Institute.

So make your morning commute more interesting and stop by Oak and Wilson between 7 and 11 a.m. on Friday the 19th. We can’t wait to see you!