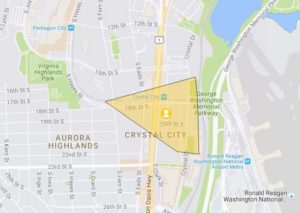 A sizable portion of Crystal City is without power this morning.

Dominion says more than 300 customers, in an area centered around the Metro station, are in the dark as a result of a storm-related outage. Power isn’t expected to be restored until this afternoon.

The outage includes large office buildings and traffic lights up and down Crystal Drive. Police are on scene, setting up cones to direct traffic through the uncontrolled intersections, though generators are being brought in to bring the traffic signals back online.

Last night’s storm is causing other issues around Arlington this morning, as well. On the Custis Trail, a large tree has reportedly fell onto and blocked the trail between N. Quincy and Nelson streets.