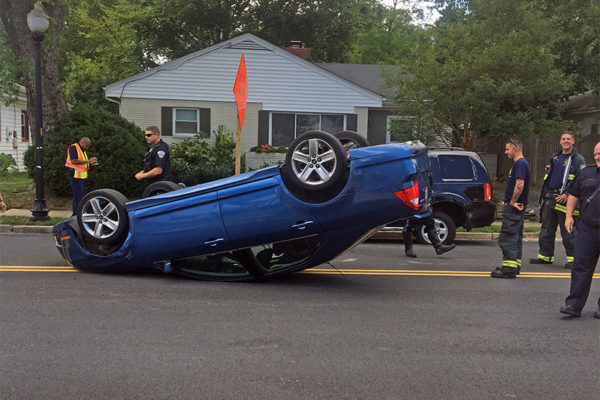 A car overturned on a residential street in the Arlington Heights neighborhood this afternoon.

According to witnesses, “the driver became distracted and rear ended a parked vehicle causing the car to flip.” The driver, we’re told, was able to walk away stunned but otherwise unscathed. Luckily, no one else was reported to be hurt.

A Fenwick Street resident said that neighbors refer to their windy stretch of road as the “raceway.”

“Many vehicles use this street as a cut through and the 25mph speed limit is ignored,” said Zelmira McCann. “As neighbors we’ve been trying to get the [County] Board’s attention about this street in particular. It’s a neighborhood street but people use it like a raceway.”

McCann said she has spent $250 of her own money to put up signs to “remind people that children and pets are at risk.” The signs, she said, have since been stolen.