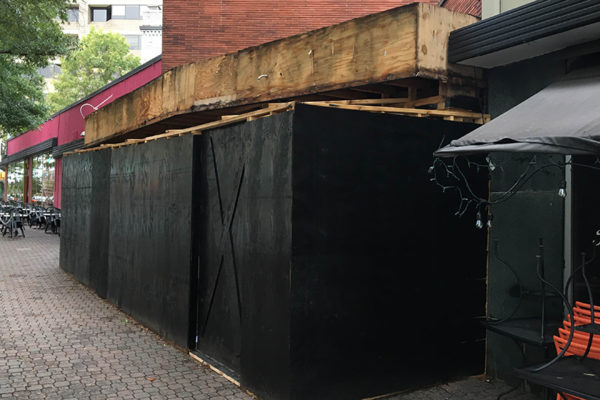 (Updated at 1:44 p.m.) The new business slated to open in the former Ri Ra space in Clarendon will be a lounge and restaurant called Wilson Hardware.

An ownership group signed a lease for the space at 2915 Wilson Blvd earlier this year. The forthcoming bar’s co-owners include Jad Bouchebel, Faris Ghareeb and Alex Haje.

“Wilson Hardware is a dining bar experience,” Haje said today when reached by phone. The bar’s name is an homage to Virginia Hardware, the hardware shop that occupied the storefront until 2005, he explained.

“In terms of the aesthetic, there’s going to be a real contrast between the name and look,” Ghareeb said. The duo added the bar will have a “trendy, cool” vibe and will serve “good food” alongside a “good selection of wine, beers and craft cocktails.”

If those descriptions sound a bit vague, that’s because they’re supposed to be. The bar’s owners “don’t want to give away too much” before it opens, Haje said.

A black wooden facade currently obscures the bar’s ongoing construction, but that’s by design, Haje said. Once construction nears completion, the barrier will be removed.

“Arlington’s got a lot of beautiful places but they’re somewhat similar in design,” Haje teased. “I think this is going to be something fresh.”

If construction goes as planned, the bar could open by the end of the year. If not, it will likely open early next year, Haje said.

“We’re going to try to get it open as soon as possible,” Haje added.