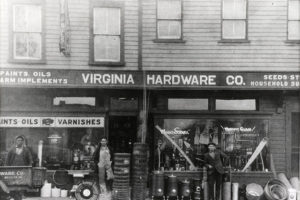 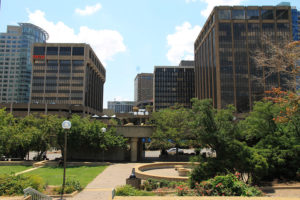 (Updated at 3:10 p.m.) The photo on the left is of Virginia Hardware at 2016 N. Moore Street, in the 1930s. The store opened at this location in 1924, when Rosslyn Circle still existed. For years, it was run by Harry Goldman, until the business was eventually passed down to his son.

The photo on the right shows what that part of Rosslyn looks like now. It’s the area that is now Rosslyn Gateway Park, across the street from where the new Rosslyn Gateway development is set to go in.

In 1963, Virginia Hardware moved from Rosslyn to 2915 Wilson Blvd in Clarendon, where it remained for decades. Goldman’s family ended up selling the business to long-time employee Rick Iglesias in 1998.

Virginia Hardware closed its doors for good in 2005. Iglesias said a variety of factors, including the high cost of running a small business, forced him to shut down. The Clarendon site is now home to Ri Ra.