Pacers Running may not be a startup, but it is using digital media to connect with customers in an innovative way more akin to a tech startup than a small specialty retailer.

Since April 2015, Pacers has been extending its reach with a podcast called Pace the Nation. While podcasts aren’t new, they have increased in popularity and influence since Serial helped to reinvigorate the format.

Pace the Nation is a weekly running podcast recorded by a trio of Pacers familiar faces: Chris Farley, who co-owns the chain of stores, Joanna Russo, who manages the Navy Yard store in D.C., and William Docs, a former college teammate of Farley. The show often features special guests, from local high school cross country coaches to elite athletes like Matthew Centrowitz, who won Olympic gold in Rio in the 1500 meter. 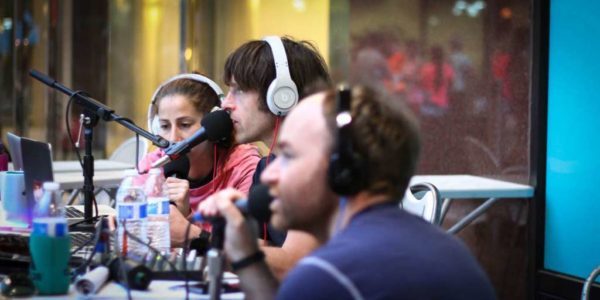 Pacers was founded in 1991 in Alexandria, and has since grown to five local stores in the District and Virginia, as well as a location in Princeton, N.J. Russo said the podcast is a way to still maintain a personal relationship with shoppers as the business branches out.

“It started as one family-owned business and it’s grown to five in the area and one in Princeton,” she said. “When you start to get bigger, it helps people still connect with us if we were still that one storefront.”

The podcast, which launched in April 2015, at first had just a handful of listeners – mostly family members and people who were fans of the store – but now regularly gets about 1,000 listeners every week, Farley said.

Docs said that the listeners are his favorite part of the show.

“I think the coolest thing about the whole podcast for me is the community that it’s built. We have some people who never miss an episode, they tweet to us, they come out to social events,” he said.

Many of the show’s listeners are active in the local running community — they who sign up for local 5Ks and marathons, who join running groups and train all year round. One of Pace the Nation’s devoted fans, Annie Hughes, said that she has been listening to the podcast for a little over a year and looks forward to the new episodes every Monday.

“Arlington can often seem big and impersonal, but PTN showcases the vibrant running community here and invites the listeners to be a part of it,” she said. “When Farley and Docs speak about their favorite running trails, I can immediately relate, as I run those trails too.”

Hughes said she also loves the show’s non-running discussions, including conversations about dogs, books and Uber woes — something to which all locals can relate.

The podcast started as a way to just “spread the gospel of running,” Farley said. Even now that it’s attracted quite a following, Farley said its primary purpose isn’t to increase sales or drive business to the store.

“This really gives us this platform that really tells our brand story,” he said. “It gives a look into our personalities and who we are and I think makes us more relatable. I think when you get more people to relate to you and to like you, they’re more likely to do business with you. But that’s not even the goal of the show, to ring the register. It’s really to truly inspire people to get out and run.”

The Pacers Clarendon store (3100 Clarendon Blvd) will soon include a new studio for the podcast, with a window to the street so passersby can see the podcast hosts in action, according to Farley. He said he chose to base the show in the Arlington store because of the large number of runners in Arlington, and because it’s the place he’s called home for nearly his entire life.

“I think I’m sort of a rare breed in that I actually grew up here and now live here,” he said. “I definitely make that known on the show, that I am very proud of being an Arlingtonian.”

Read more →
More Stories
The Chew: Your Dog and Your PregnancyBREAKING: Police Chase Ends With Crash on Lee Highway