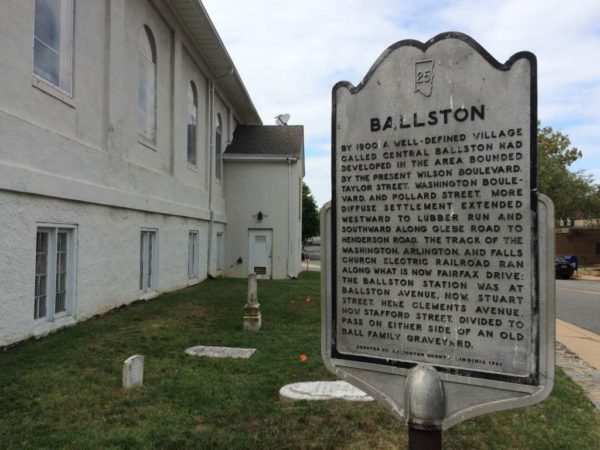 A group of residents has started a Change.org petition to protest against the planned relocation of a small, 150-year-old graveyard near the Ballston Metro station.

The graveyard, which contains headstones and perhaps the remains of members of the Ball family, for which Ballston is named, is being moved to make way for a redevelopment of the Ballston Central United Methodist Church site.

The development will consist of a new church, 132 apartments and a daycare and preschool facility.

“The Robert Ball Family Cemetery does not need to be moved,” the petition concludes. The full text from the petition is below.

The town of Ballston was platted around 1900, entitled Central Ballston, with the graveyard in the exact center of the plat. The town was named for Robert Ball and his family.  In 1906, a 1/4 acre of the original 11 acres was given to the Methodist Episcopal Church for use as a church, parsonage and such, and the church was to maintain the graves and markers accordingly.  In 1922, the road was widened, but curved around the church and graveyard.  The church and county considered the cemetery closed for additional burials.

The church has maintained the cemetery since 1906, now over 110 years.  With development closing in from all sides, the church is under pressure to allow the removal of the graves, as the developer wants to build to the curb.  The permit to remove the human remains filed with the Virginia Department of Human Resources states very clearly that even if relatives and concerned parties do not want the burials removed, the development can proceed without their permission because of the benefits to the public.

No provision appears to have been made to incorporate the cemetery into the development design.  The developers always thought they would move the graves.  The cemetery is on the corner of the development and could be spared by simply building around it.  A nice border wall already exists.  The buildings could curve around the cemetery, and even curve or arch over it, allowing sunshine down.  Signage could be added on how Ballston was formed and the pivotal role the graveyard and Robert Ball family had on the placement of the church and the community.

The Robert Ball Family Cemetery does not need to be moved.