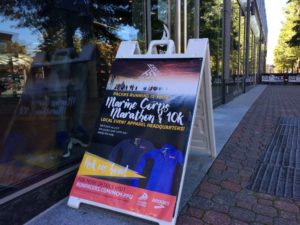 Those running the Marine Corps Marathon on Oct. 30 now have an alternative to picking up their race packets at National Harbor this year.

The new packet pickup location has some worried about crowds at the Maryland shopping, entertainment and tourism destination, which is not Metrorail accessible. In response, local running store Pacers has made a deal to pick up packets for customers and bring them to Pacers locations, including the store at 3100 Clarendon Blvd in Clarendon.

The catch: you have to buy at least $125 in Brooks running gear — including Marine Corps Marathon apparel, which will be available — at Pacers between Sept. 28 and Oct. 24 to be eligible.

Pacers will also be holding mini-expos at the company’s Clarendon and Navy Yard stores just before the marathon.

“We will be hosting expotiques at Pacers Navy Yard and Pacers Clarendon on Friday, October 28 and Saturday, October 29 with all the great last minute essentials and great deals you expect at the expo — just without the massive crowds and travel headaches!” Pacers said on its website. “And for those of you who participate in our packet pick up program, we’ll have your packet waiting for you with a smile.”