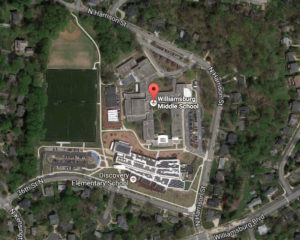 Three years, 18 working group meetings and 886 pages of posted documents later, the county is nearing the final stretch of a public process to decide whether to add lights to the athletic fields at Williamsburg Middle School.

The Williamsburg Field Evaluation Work Group will be holding a public meeting on Wednesday, Nov. 2 to discuss the process and gather more community input before drafting a report for the County Board.

“Come see what was learned, ask questions and share your input,” said a description of the meeting, which will be held from 7-9 p.m. at the middle school (3600 N. Harrison Street).

The process started in September 2013, with the County Board’s approval of a new elementary school — later named Discovery Elementary — on the Williamsburg site.

Controversy over whether new synthetic turf fields should be lighted — which pitted soccer parents against a group of residents who live near the school — prompted the Board to call for the creation of a working group. The group’s charge was finally approved, after a bit of additional intrigue, in 2015.

The 15-member group was tasked “to lead a robust community process to evaluate whether or
not to light the Williamsburg synthetic fields.” At issue: whether resident concerns about excessive light, noise and traffic at night outweigh the county’s usual policy of lighting synthetic fields to maximize use (primarily for youth sports) and return on investment.

Earlier this year the timeline for the working group was pushed back: it’s now expected to prepare a draft report in November and finalize its recommendations in January. The County Board is then expected to consider the group’s recommendations at its February meeting.