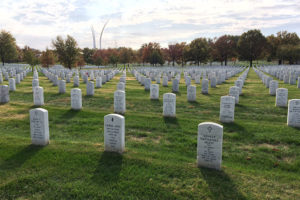 (Updated at 6:05 p.m.) Not all cyclists will have the freedom to pedal through Arlington National Cemetery later this month.

Starting Oct. 26, the Army will bar bike riders from using a 1.2-mile route on Meigs, Sherman and Schley drives to cut through the property, unless they are specifically there to visit a gravesite, according to a new rule.

Bicyclists visiting a grave can get a pass from the cemetery’s Welcome Center to enter the grounds.

Instead of cutting through the cemetery, cyclists can travel into Joint Base Myer-Henderson Hall and use a 1.3-mile route on McNair Road and Marshall Drive to reach a path along Route 110 that leads to the Memorial Bridge.

Cyclists using the base still have to abide by security policies that were enacted last year. Those security policies have been criticized by some as overly restrictive, requiring those who are not members of the military to apply for a special pass every 60 days.

“The cemetery is not intended to serve as a shortcut route for bicyclists commuting to and from other locations,” the military says. “Rather, as an operational cemetery conducting up to 30 funerals a day and hosting official visits from visiting dignitaries on its narrow roads, the primary purpose of these roads are to facilitate funeral processions, military units, official vehicles to include their escorts, and cemetery equipment and vehicles operating in the daily care of the cemetery.”

Cyclists who use the Arlington National route have written to oppose the regulations. More than half of respondents in an unscientific ARLnow poll also were against the rule.

“Several commenters argued that bicycles do not impact the decorum of the cemetery,” the Army said in response to cyclist concerns. “The Army disagrees with and rejects these comments for several reasons related to the nature of cemetery operations, decorum, security, and safety.”

Additionally, while the Army assumes that most riders bear no malice of intent to demonstrate disrespect or violate decorum or decency, bicyclists traversing the cemetery grounds, even at the posted speed limit, can and do impact the decorum of funeral processions and services, which can number up to 30 per day, as cyclists pass along or across these procession routes. These funeral processions include not just the families and mourners, but include caissons drawn by horses, military bands, and military escort elements all travelling at a walking pace. For these services, bus tour operators and vehicles are forced to stop because there is simply not enough room to pass. This ensures proper decorum. Likewise, visitors on foot typically stop and yield to the processions also as a sign of respect. Previous trial periods with bicyclists in the cemetery showed bicyclists did not typically stop for these processions. The cemetery does not have the requisite staff to monitor and enforce this behavior for bicyclists.