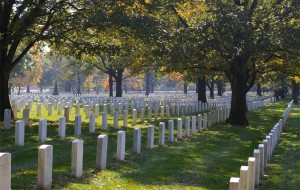 Should cyclists be allowed to ride through Arlington National Cemetery if they’re not there specifically to visit a departed loved one?

Currently, cyclists are allowed to use a specific route through the cemetery, a route that’s mostly used by bike commuters heading to D.C. However, that may soon change.

As reported two weeks ago on the Fairfax Alliance for Better Bicycling blog, the Army is considering new regulations that would ban bicycling through national military cemeteries except for those visiting gravesites or niches. That has cyclists who use the Arlington National route writing to oppose the regulations.

The recent uproar over those playing Pokemon Go at Arlington National Cemetery suggests that among the general public there is still a special reverence for the cemetery’s hallowed grounds. Does that extend to those quietly bicycling through the cemetery?