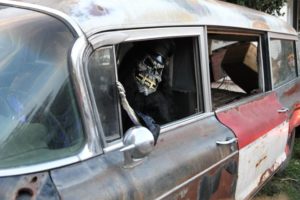 With plenty of Halloween festivities planned in Arlington this weekend, a local nonprofit is again providing a way for bar-goers to get home safely, for free.

The Washington Regional Alcohol Program will be offering its SoberRide free taxi service from 10 p.m. Saturday to 6 a.m. Sunday.

As a means of making the Washington-metropolitan area’s roadways a little less frightening this Halloween, free cab rides will be offered to would-be drunk drivers throughout Arlington County, Virginia this Saturday evening, October 29th.

Offered by the nonprofit Washington Regional Alcohol Program (WRAP), the 2016 Halloween SoberRide® program will be in operation at 10:00 pm on Saturday, October 29th and operate until 6:00 am on Sunday, October 30th as a way to keep local roads safe from impaired drivers during this traditionally high-risk period.

During this eight-hour period, area residents ages 21 and older celebrating with alcohol may call the toll-free SoberRide® phone number 1-800-200-TAXI (8294) and be afforded  a no-cost (up to a $30 fare), safe way home. AT&T wireless customers can dial #WRAP for the same service.

Local taxicab companies throughout the Washington-metropolitan area provide this no-cost service to local residents age 21 and older who otherwise may attempt to drive home after drinking.

“The scary fact is that over half (52%*) of all U.S. traffic deaths during Halloween involve drunk drivers,” said Kurt Gregory Erickson, WRAP’s President.

More information about WRAP’s SoberRide® initiative can be found at www.soberride.com.