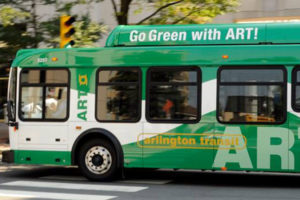 One person was hospitalized this morning after a crash involving an Arlington Transit bus.

The crash happened around 9:30 a.m. at the intersection of S. Glebe Road and Four Mile Run Drive, according to police.

The ART bus “was struck by a car attempting to change lanes,” said Arlington County Police spokesman Capt. Bruce Benson. “One passenger on the bus complained of neck pain and was transported to the hospital. There were only two other passengers on the bus at the time of the accident and they left the scene before police arrived.”

The victim’s injuries were believed to be minor.