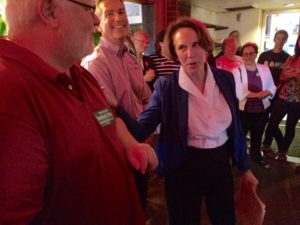 In this week’s podcast, we asked Garvey about a number of local issues, from development to transit along Columbia Pike to preparations for snow removal this winter.

We also asked Garvey (around 36:30) about her support of Republican-turned-independent John Vihstadt, her colleague on the County Board. It was Garvey’s endorsement of Vihstadt over Democrat Alan Howze that precipitated her temporary expulsion from the local party’s good graces.

“He’s an independent, he’s clearly an independent,” Garvey said of Vihstadt. “It’s basically where a lot of Democrats are moving towards, and in fact where I think the center of this country is: socially liberal and fiscally responsible.”

“That’s where a lot of us are and I think it’s where Arlington is,” she concluded, “which is why I think John won and why I won.”

Garvey said the Board is functioning better as a body with more diverse viewpoints, as opposed to the previous all-Democrat regime that was “accused, somewhat justly I believe, of being in lockstep.”

Check out interviews of other local candidates on the Nov. 8 ballot from our previous podcast episodes: County Board candidate Audrey Clement (I) and congressional candidates Rep. Don Beyer (D) and Charles Hernick (R).

Be sure to subscribe to ARLnow.com’s podcast, 26 Square Miles, on iTunes, Google Play, Stitcher or TuneIn.