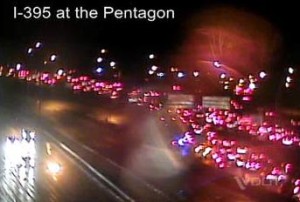 The annual autumnal time change is associated primarily with earlier sunsets, but fatigue due to disrupted sleep patterns is another side effect.

Between darkness suddenly occurring during the duration of the evening rush hour, and bleary-eyed drivers, the time change can actually be a safety hazard on the roads.

AAA Mid-Atlantic this week issued a lengthy press release that included the following tips to stay safe over the next couple of days.

“If I Could Turn Back The Hands of Time.” As it turns out, soul balladeer Tyrone Davis wasn’t the only one wishing to go back in time to rectify things done and left undone. Timing is everything in love and life, and we will have the opportunity to turn back the clock at least one hour at 2:00 A.M., Sunday, November 6, 2016. In addition to setting clocks back one hour, motorists should be prepared for sun glare during their morning commute and for reduced visibility on the road during their evening commute, AAA Mid-Atlantic and the Mid-Atlantic Foundation for Safety and Education warn. The time change can cause disturbed sleep patterns, and when combined with the earlier dusk and darkness during the evening commute, become a formula for drowsy driving and fatigue-related crashes — conditions many drivers may be unaware of during the time change.

As everyone knows, there are safety concerns when Daylight Saving Time begins in the spring. In fact, car crashes increase by up to six percent on the Mondays following the time change in the spring, data from the National Safety Council suggest. However, when clocks “fall back” in autumn, drowsy driving becomes a significant threat to motorists, caution AAA Mid-Atlantic and the Mid-Atlantic Foundation for Safety and Education. That is because their evening commute will now take place in darkness. Sleep-deprived drivers cause more than 6,400 deaths and 50,000 debilitating injuries on American roadways each year, according to the National Sleep Foundation (NSF).

“The fall colors are glorious, yet ‘winter time’ begins anew this weekend. There is no doubt about it, many will enjoy an extra hour of sleep, yet few commuters and motorists realize the added dangers that can come as the result of a time change – especially when they are behind the wheel,” said John B. Townsend II, AAA Mid-Atlantic’s Manager of Public and Government Affairs. “Although we gain an hour of sleep, it is unsafe to drive when we are sleep deprived. This one hour shift in time during the fall not only creates darker driving conditions, it can also disturb sleep patterns, perhaps even resulting in drowsy driving episodes.”

Nearly 1 in 3 drivers (32 percent) say they have driven when they were so tired they had a hard time keeping their eyes open in the past 30 days, according to the latest Traffic Safety Culture Report from the AAA Foundation for Traffic Safety. In fact, more than 1 in 5 (22 percent) admitted doing this more than once during that time. Previous research by the AAA Foundation estimates that drowsy driving is a factor in an average of 328,000 crashes annually, including 109,000 crashes that result in injuries and 6,400 fatal crashes.

Plus, there are other dangers stemming from the biannual time shift. Following the fall time change, motorists must adjust their driving habits, and for safety’s sake, also watch for children and others who will be less visible outdoors. That’s especially true during the first week of the time change. Consider this, sunrise and sunset will be about one hour earlier on Sunday, November 6 than the day before. Also factor in the fact it will be lighter in the morning as motorists drive into the sun, causing temporary blindness and making it
harder to see the road ahead, potential hazards and other highway users, including motorists, pedestrians,
school children and cyclists. Drivers can expect reduced visibility because the evening commute time will be darker. Teen drivers who aren’t as experienced with nighttime driving and motorists with vision issues may need to be especially careful, warns the Mid-Atlantic Foundation for Safety and Education.

“The morning sun may also cause reflections off car windows, hoods or other metallic portions of automobiles and it can be a serious hazard to drivers and pedestrians,” said Joseph Beddick, Safety Services Manager for the D.C. Metro Area, and Mid-Atlantic Foundation for Safety and Education. “Sun glare tends to be worst in the morning and in the late afternoon. The glare may cause temporary blindness. To reduce glare, invest in and wear high-quality sunglasses and adjust your car’s sun visors as needed. Late afternoon driving also presents a similar glare problem, so heed the same recommendations. Drivers can also use the night setting on the rearview mirror to avoid glare from headlights approaching them from behind.”

Before the time change in the wee hours of Sunday morning, drivers may need to check to make sure all vehicle lights are working properly. When starting your commute, remember to turn on your headlights and then turn them off when you reach your destination. Motorists should be prepared to face changed conditions during the morning commute. In addition, children, pedestrians, joggers, walkers and bicyclists likely will continue to be outside but will be a lot less visible during the evening commute. Accordingly, motorists should slow down and be extra alert, particularly in residential neighborhoods and school zones.

It only takes a minute to become involved in a life-altering crash. Take heed. “It raises the question has Daylight Saving Time outlived its usefulness? After all, it was designed “with the purpose of making better use of daylight and conserving energy.” Yes, “Just a tiny little minute, but eternity is in it.”