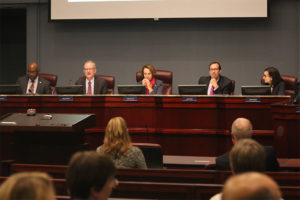 The Arlington County Board on Saturday spent an hour and a half discussing changes to the county’s towing ordinance.

The Board voted to advertise a series of changes — final approval is set for next month — but not before making some alterations to the County Manager’s recommendations.

The alterations were essentially intended to prevent towing malfeasance. Among them:

The Arlington Chamber of Commerce objected to the authorization requirement — also referred to as a “second signature” — on the grounds that it could cost businesses more time and money to remove trespassers who park on their lots.

The Chamber sent a letter to the Board expressing its “vehement opposition” to the requirement. Chamber President and CEO Kate Bates also spoke at the meeting.

“Nobody likes it when their car is towed but that is not justification for putting significant burden on property owners,” said Bates.

County Board Vice Chair Jay Fisette proposed the addition of the second signature requirement. It passed, but with at least two County Board members saying they were unlikely to support it when a final vote is taken next month.

Fisette said that the low number of formal complaints against towing companies — there were 87 towing complaints and seven violations recorded by the county in 2015 — does not reflect the reality of widespread disdain for so-called “predatory towing” practices in Arlington.

As evidence, Fisette cited an ARLnow.com poll from last year in which 84 percent of respondents — nearly 2,300 people — said towing companies in Arlington were more predatory in their conduct than “just doing their job” for local businesses.

“It’s actually refreshing to have the Vice Chair cite an ARLnow poll,” said Board member John Vihstadt, to laughter in the County Board room.

Fisette also cited an ARLnow.com opinion column that recounted someone being towed from the former Taco Bell lot on Wilson Blvd in 2000 while eating at the restaurant — because a spotter saw him walk next door to get cash from an ATM.

A resident who spoke at the Board meeting agreed with Fisette’s assessment of towing practices.

“Many mom and pop restaurants are being harmed by aggressive and predatory towing… it’s driving business away,” said Sarah McKinley, a towing critic and the vice president of the Columbia Heights Civic Association. “A second signature creates a balance and gives retail owners some control over this situation so they aren’t so damaged.”

The Chamber, however, said towing companies provide a valuable service to local businesses. The Chamber supported the County Manager’s original proposal, which it described as a “compromise.”

“We… emphasize our vehement opposition to the addition of a second signature requirement for the removal of illegally parked vehicles or the prohibition of parking ‘spotters’ to monitor parking areas,” the Chamber wrote in its letter to the Board.

“The addition of either would present significant administrative and cost burdens to implement and would deteriorate the level of service provided by towing contractors to local businesses who must keep parking areas clear and available to their employees, visitors and customers to remain financially viable,” the letter said. “We appreciate the steps the County has been working towards to make Arlington a more business friendly community, and urge extreme caution to the Board in exploring proposals that would shift things in the opposite direction.”

END_OF_DOCUMENT_TOKEN_TO_BE_REPLACED

More Stories
Ask Eli: Impact Of A Bad Listing In Your NeighborhoodA Day in the Life: Creatively Building Business Identities at Winking Fish