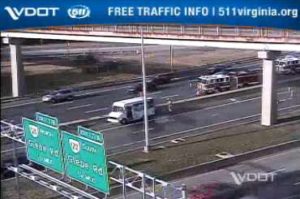 Several lanes of southbound I-395 are blocked due to a vehicle fire.

A van caught fire in the HOV lanes near Shirlington Circle around 2:45 p.m. The fire was extinguished by firefighters, who are still on scene examining the van’s engine compartment.

Currently, two mainline lanes and one HOV lane is squeezing by the scene, with HOV backups extending to the Pentagon.