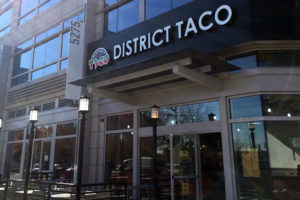 Homegrown local restaurant chain District Taco is planning to open a south Arlington location at some point next year.

District Taco, which has existing Arlington locations on Lee Highway and in Rosslyn, revealed its plans in a press release about another new location, which opened today (Monday) in the Bailey’s Crossroads area.

The company has a specific south Arlington locale in mind but has not yet signed a lease, District Taco CEO and co-founder Osiris Hoil told ARLnow.com.

“As of right now I don’t want to release the exact location since it is not a 100% done deal,” Hoil said. If all goes to plan, the new restaurant will open in 2017.

Today, meanwhile, District Taco opened a new location along Route 7 in Bailey’s Crossroads, not far from Arlington’s Wakefield High School. The first 50 people in line were to receive a free meal and a swag bag, according to the press release (below).

The press release says additional District Taco locations are set to open next year in Tysons Corner and College Park, Maryland. The company has also “set its sights on” the Philadelphia area.

District Taco is opening a location in Bailey’s Crossroads on Monday, November 21st, 2016. The restaurant is located at 5275-C Leesburg Pike. Originating as a food truck in 2009, District Taco now employs almost 400 people and boasts nine locations across the DC Metro area.

District Taco CEO and Co-founder, Osiris Hoil, plans to continue expanding and creating opportunities for others.

“When I lost my job in 2008 I experienced the need and desperation for a job. I wasn’t able to provide for my family and that devastated me,” says Hoil.

“Now every time I open a new District Taco I just think of how many people we are going to put back to work, while also making sure we create a new career path for them. I believe the sky is the limit and I will continue with my American Dream!”

As a company that encourages philanthropic outreach, District Taco actively partners up with non-profits organizations for new restaurant openings. For the Bailey’s Crossroads grand opening, District Taco is hosting a fundraiser for the Leukemia & Lymphoma Society. A percentage of all sales made throughout the entire day will be donated to the organization. The Leukemia & Lymphoma Society works towards finding a cure for leukemia, lymphoma, Hodgkin’s disease and myeloma and towards improving the quality of life of patients and their families.

Business hours for the grand opening will be 11am to 10 pm. District Taco expects a positive turnout so it is best to arrive prior to the opening time. The first 50 customers in line will eat for free as well as receive a District Taco goodie bag of swag.

In 2017, District Taco will open locations near College Park MD, in Tysons Corner VA, in Arlington VA and will set its sights on Philadelphia PA.