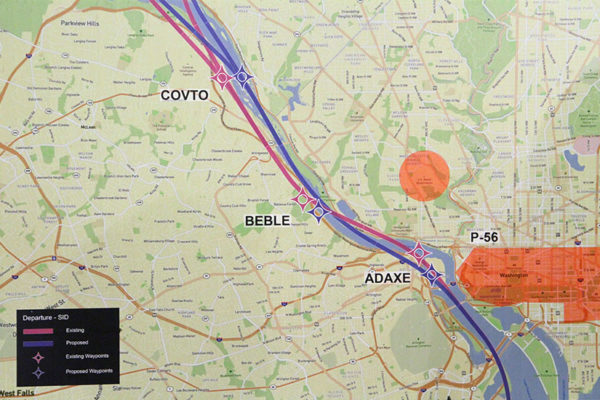 The Federal Aviation Administration is scrapping a proposal to shift the northerly flight path from Reagan National Airport closer to Rosslyn, according to Rep. Don Beyer’s office.

The FAA sought feedback on the plan during a public meeting at Washington-Lee High School in September. The plan, which was intended to reduce noise in the Foxhall Village neighborhood of D.C. while placing flights more directly over the Potomac River, was met with skepticism from Arlington residents. County Board members pointed out that aircraft noise in Arlington was already on the rise under the current flight path.

Rep. Beyer (D-Va.) sent a letter to FAA Administrator Michael Huerta in October, outlining “serious concerns with many aspects of the plan.” The congressman hailed the FAA’s decision to terminate the proposed changes.

“Today’s decision by the FAA to terminate the proposed… departure procedure is a positive development in our ongoing quest to quiet the skies over northern Virginia,” Beyer said in a statement. “While the proposed path was intended to increase flight time over the Potomac River, it was significantly concerning that there was no clear understanding on the level and impact of plane noise on airport area communities.”

END_OF_DOCUMENT_TOKEN_TO_BE_REPLACED

More Stories
Ready Arlington: Be Ready, Be NotifiedNeighborhood Pub ‘Quinn’s on the Corner’ Opens in Rosslyn