This biweekly column is written and sponsored by the Arlington Office of Emergency Management.

Elizabeth Dexter is a Watch Officer, for the Office of Emergency Management in Arlington.

Life Happens. Life is messy. — In 2007, my trip into work took four hours. It normally takes 45 minutes. I left the house while it was raining, but it quickly turned into snow. I remember being angry and stressed that I was going to be late for work. Almost everyone has a similar story, whether it was the Angry Inch or Snowzilla (in 2016), or Snowmageddon (in 2014). After each of these events, people often ask, “How can I stay informed about things like this? How can I avoid these emergencies?” 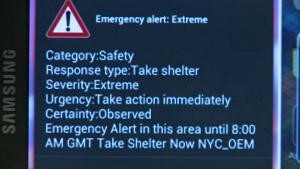 Can You Reach Me Now? — As technology continues to improve, so do our options for being notified about emergencies where we work, live and play. In the past, people had to wait for a radio broadcast, the 11 o’clock news or newspaper to find out if an emergency was happening in their area. Now people have access to several notification methods:

Wireless Emergency Alerts (WEA) — Ever been startled by a blaring siren on your phone? It was probably a WEA. These alerts are sent out to all cell phones inside a designated area. These messages only happen in rare situations:

Arlington Alert — If you’ve heard us say it once, you’ve probably heard us say it 1,000 times: Arlington Alert is a free service that provides you information when major traffic events, mass transit issues and other emergencies occur in Arlington. It also issues weather alerts from the Weather Service. These alerts can be set up to go to cell phones, pagers or even an email address! In certain situations, they can even call a phone and deliver a message by voice.

Emergency Subscriber Listings (you may have heard this also referred to as “Reverse 9-1-1) — A system that uses landline listed and unlisted telephone numbers to call the home or business and relay critical information. Here in the county, this has been used to tell individuals about police activity in an area, and also to ask for assistance in looking for a missing child.

Facebook Safety Check — If you happened to be in an area where a major crisis has happened, they will allow you to mark yourself safe and let you see which of your friends who are also in the area have also checked in. On the same page, you can also get basic information about the crisis (location, date, what happened and who to call for assistance).

Social Media — It’s fast, it’s crowdsourced and it can be accurate — but not always. Many people have turned to social sources like Facebook and Twitter for information about what’s going on around their neighborhoods. The quantity and quality of information can be mixed, so don’t forget to check verified, official sources as well. For instance, on December 13th, residents had questions about sirens they heard in South Arlington on I-395. Many people took to Facebook and Twitter to ask questions and share what they knew or had seen. Someone tweeted at the Arlington County Police Department and ACPD responded with an official explanation of what was going on — even before the story broke here on ARLnow!

It’s not just Social Media — In the moments after the Paris Terror attacks businesses, such as Airbnb and Uber, reached out to their customers to let them know what had happened and actions they should take.