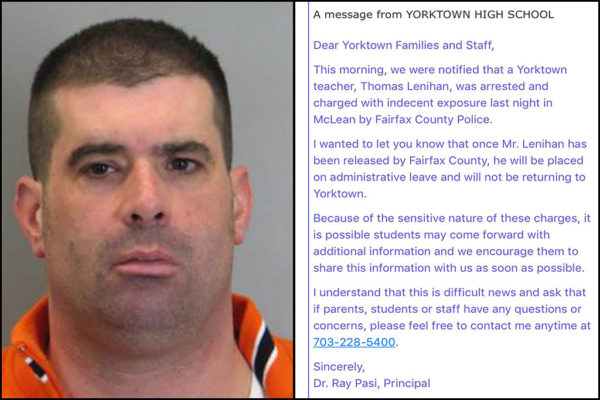 A history teacher at Yorktown High School, has been charged with indecent exposure by Fairfax County Police after an incident in Tysons Corner Thursday night.

Police say Thomas Lenihan, 38, exposed himself to two teens in the locker room of the Sport & Health Club on Greensboro Drive. He was arrested on two counts of indecent exposure shortly thereafter.

Lenihan will be placed on administrative leave and will not return to Yorktown, families were told in an email, which also encouraged students who may have additional information about Lenihan to come forward.

More on the charges from the Fairfax County Police Department:

Officers were called to the 8200 block of Greensboro Drive, a Sports and Health Club, yesterday around 9:30 p.m. for a report of a man exposing himself to two juveniles in the locker room. The victims, 16 and 17 years old, told employees that a man had watched them in the shower and followed them around the locker room while exposing himself.

Officers located the suspect at the business and identified him as Thomas Lenihan, 38, of Falls Church. Lenihan is currently employed as a teacher in Arlington County at Yorktown High School. He was arrested, taken to the Adult Detention Center and charged with two misdemeanor counts of indecent exposure. He was released on a $5,000 bond.

Anyone who might have witnessed this incident is asked to contact the Fairfax County Police at 703-691-2131, or contact Crime Solvers electronically by visiting www.fairfaxcrimesolvers.org or text-a-tip by texting “TIP187” plus your message to CRIMES (274637).