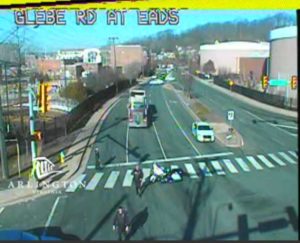 All lanes of S. Glebe Road have been temporarily shut down due to cash in the roadway.

A traffic camera shows police blocking the intersection of Glebe and S. Eads Street, and directing drivers to turn around.

Initial reports suggest there was a bank robbery in Alexandria and the robber — described as a white male wearing a black beanie cap — threw a bag of cash, which also contained a tracking device, out into the middle of Glebe Road.

Police are documenting the scene and trying to deal with cash that was reported to be “all over” the road.

Update at 9:50 a.m. — Police have collected the cash and the road closures are being lifted. Alexandria Police say the bank robbery happened on the 3700 block of Jefferson Davis Highway; that matches the address of a Navy Federal Credit Union location at Potomac Yard.

Update at 5:30 p.m. — Alexandria Police have released the following press release about the robbery.

The Alexandria Police Department is investigating the robbery of a Navy Federal Credit Union located at 3725 Jefferson Davis highway. On Monday, February 6, 2017, at 9:17 a.m., a man entered the bank and passed the teller a note demanding money. The teller complied and the suspect fled in a vehicle with an undisclosed amount of cash. There were no injuries.

The suspect is described as a white male, approximately 6’1″ to 6’3″ tall with a thin build. He was wearing a black coat, blue jeans, a black hat, and dark aviator-style sunglasses.

The FBI is offering a reward of up to $5,000 for information that leads to the identification, arrest, and conviction of these criminals.

Police ask that anyone with information about this incident call Detective Brad Cecchetti at 703.746.6858.