(Updated at 5:45 p.m.) Organizers are hoping for a Mardi Gras miracle, but it looks like tonight’s parade in Clarendon will be a soggy one.

The 18th annual Clarendon-Courthouse Mardi Gras Parade is slated to kick off at 7 p.m., making its way up Wilson Boulevard from N. Barton Street to N. Irving Street. 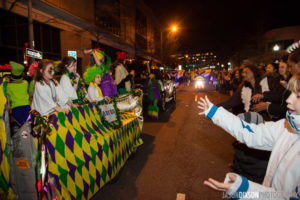 An hourly forecast suggests rain may begin shortly before the parade begins, but Matt Hussmann, executive director of the Clarendon Alliance, says it will go on rain or shine — unless there is lightning in the area.

“We’re going forward and hoping the weather holds off,” said Hussmann. “The Mardi Gras Ball will go on irrespective.”

The annual parade has not had the best luck with weather. It was postponed in 2010, postponed and then cancelled in 2014, and postponed again in 2015 — all due to snow. It rained during the rescheduled 2015 parade.