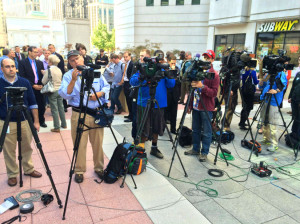 With a few exceptions — like breaking news — ARLnow does not publish on weekends.

We also only sparingly cover things like high school sports or do long human interest feature stories, things which readers have told us — in surveys and in their actions — are a lesser priority than news about core topics like crime, fire, local government, local businesses, weather and traffic. At the same time, readers frequently ask for us to “investigate” various topics, but true investigative journalism is time-consuming and expensive and hard to do while on the daily local news grind.

So what’s the solution to this for those readers who have emailed us and asked for more weekend coverage, more in-depth features and more investigative stories?

One possibility is for ARLnow to launch a membership program as part of a larger community journalism project.

Services like Patreon allow fans to support, with a small monthly contribution, the creators who are making content they’re passionate about. Similarly, we’re wondering if Arlingtonians would be interested in supporting local content that goes above and beyond ARLnow’s core news mission.

Those who sign up as members would get to weigh in on what kind of content their contribution should be funding — features, investigative pieces, coverage of local arts and nonprofits, etc. The new content would run as an ARLnow “weekend edition” — so as to not overwhelm readers who follow our weekday news coverage.

At the same time, members could get other benefits. We’re considering exclusive discounts from local businesses, access to exclusive ARLnow member events, access to a members-only online forum and perhaps the occasional ARLnow schwag (if NPR has totebags, we can have totebags).

That all said, maybe a $6 a month for local news isn’t something that people want to pay, or you’d rather we just stick with our core mission. Tell us what you think in the poll below and in the comments.