Want a way to impress friends with a wild video camera trick, à la “The Matrix”? OrcaVue will spin your camera right round, baby, right round to create a professional-looking effect. 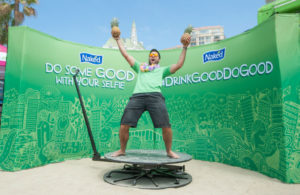 The patent-pending technology revolves a camera around whatever item or person is positioned on a central, stationary platform.

The idea was born in October 2014 when Daniel Rosenberry and his brother, Jonathan, owned a small production company and wanted to pull off a 360-degree camera shot, but they didn’t have the proper equipment and didn’t have the money to hire a crew.

Rosenberry came up with some rough sketches for a device and showed his father, who constructed the first protype from “a bunch of stuff from our garage,” Rosenberry said. “A coffee can, a lazy susan and random stuff… he essentially built the very first ‘garage’ version of what the OrcaVue is.”

The Rosenberrys told their friend, Adam Boussouf, about the camera rig idea and he suggested patenting it. “Really, we weren’t thinking about it as any sort of business endeavor” and didn’t know how to go about that, Rosenberry said. So Boussouf came on board and took care of the business aspects.

“My brother had the initial vision. I designed everything. Dad put it together. And our friend pushed us to form a business. So we’re the four co-founders,” Rosenberry said.

Soon after officially launching the business in early 2015, orders quickly piled up. “It was definitely chaotic,” Rosenberry said. “We started getting a lot of orders coming in… and we didn’t quite know what to do.” 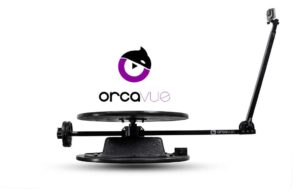 They realized they had to manufacture a lot of units in a short time span and did research to find a machine workshop. They found TechShop in Crystal City, which still is OrcaVue’s home base and where the devices are manufactured.

As for the name, OrcaVue is an acronym, of sorts, for “orbiting camera view.” The team wanted to have an animal on its logo and they did an internet search for animals that are known for circling, to reference the product’s circling functions. Fittingly, they learned that orcas — also called killer whales — swim circles around their prey. Thus, the OrcaVue name and logo came full circle and was adopted.

The business has evolved to become less about selling the camera rigs and more about selling services. The OrcaVue employees now spend most of their time on equipment rentals and event production. They show up at weddings, red carpet events and new product launches to work the machine and shoot video of the events.

OrcaVue doesn’t simply have local customers, either. The device has been used to shoot videos for numerous high-profile national clients including Olympian Simone Biles, Twitter, the Golden Globe Awards, the Cleveland Cavaliers, the New York Knicks and the TV show Dancing with the Stars.

As far as general business goals, Rosenberry would like further expansion, both in terms of the number of employees and in product and service reach. “I’d like to… grow the business regionally as well as internationally,” Rosenberry said. He’s working on that by setting up a partnership in Sweden and Australia to more easily cater to international clients.

“We’ve already surpassed anything we imagined that could happen,” Rosenberry said. “We’re a pretty relaxed company. We basically hired my friends and we all work together on it and have a great time.”