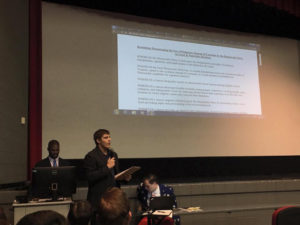 Local Democrats’ decision to choose a County Board nominee by caucus not primary has drawn the ire of some of its younger members.

At the Virginia Young Democrats’ annual convention earlier this month, the Arlington Young Democrats spearheaded a resolution to encourage the use of primary elections in local and statewide races.

The Arlington County Democratic Committee will use a so-called “firehouse primary” to choose a nominee to run to succeed retiring County Board chair Jay Fisette. Four candidates will be on the ballot: Peter Fallon, Erik Gutshall, Kim Klingler and Vivek Patil.

The unassembled caucus, in which any registered voter can show up, fill out a ballot and leave, will be held alongside the School Board caucus on May 9, 11 and 13 at Key Elementary School, Drew Model School and Washington-Lee High School, respectively. Candidates are ranked in order of preference by attendees.

But Maggie Davis, president of the Arlington Young Democrats, said such a system does not help more young voters get involved in the nomination process.

“It is incredibly difficult for a young person likely working multiple jobs with very little flexible free time to access the caucus,” Davis said. “There’s no in-person absentee voting, no absentee voting and the caucus only happens on certain times. And the Thursday night location [Drew Model School] is off the Metro corridor.” 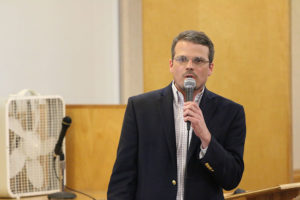 ACDC chair Kip Malinosky said the decision to use a caucus instead of a primary would encourage candidates to move away from negative campaigning, especially as it uses a ranking system.

“The issue is that neither system is perfect,” Malinosky said. “Obviously, we always want to see more people vote and make it easier for people to vote. On the other hand, primaries, especially when it’s just plurality, can be very negative.”

The Arlington Young Democrats introduced their resolution at the national convention to some reluctance from smaller jurisdictions, worried about the financial burden of funding a primary. But Davis said the principle of allowing as many people to vote as possible and all precinct voting stations being open won the day.

“It was generally accepted that we should have more open and transparent electoral processes,” she said.

Davis said the addition of a third day for caucus voting was a good compromise by ACDC, but that the Young Democrats still wish to see some kind of absentee voting introduced to allow as many people as possible to vote if they wish, even if they are absent on polling day.

Malinosky rejected the idea that a caucus allows the local party to who is chosen as the eventual nominee, and emphasized the need for positive campaigning. He added that the use of a caucus this year does not set a precedent for future nominating contests.