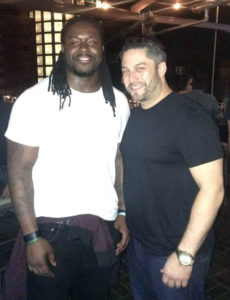 Lacy, who was earned NFL Offensive Rookie of the Year Honors in 2013 while on the Green Bay Packers, was photographed hanging out with Arlington County police officers who were patrolling the bar district. The department posted some of the photos on Twitter Monday, including one with Lacy sitting on a police motorcycle and another in which he is smiling while holding a pair of handcuffs.

Lacy also was spotted at Don Tito, where he posed with co-owner Nick Cordero.

Other professional athletes have been spotted at Don Tito over the past couple of years, including former Washington Capitals player Brooks Laich (with fiancée Julianne Hough) and United States women’s national soccer team defender Ali Krieger.

@Hilarysn He's decided to stay with his career in the NFL but we were happy to show him some of our equipment over the weekend in Clarendon.