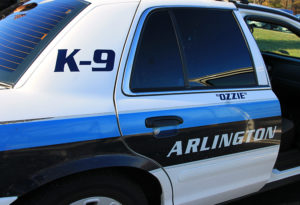 Arlington County Police K-9 units will be deployed to Arlington’s public high schools as the school system addresses what some see as a worsening drug problem.

During the last few weeks of the school year and throughout the summer, the dogs will patrol secondary schools after hours to try to sniff out illegal drugs.

Described as a “proactive measure” in a letter to parents, sent today (Thursday), the searches come at a time when parents are becoming increasingly alarmed about the presence of drugs in middle and high schools.

“Drugs in APS middle and high schools are a real problem,” said an APS employee, who wished to remain anonymous. “Administrators are quick to sweep the drug problems under the rug so it won’t make the school look bad. Do the police warn drug dealers of a raid before the raid? I’m a concerned parent, tax paying citizen and an employee of APS.”

In an email to staff yesterday afternoon, obtained by ARLnow.com, Washington-Lee High School Principal Dr. Gregg Robertson acknowledged that Arlington “has seen an increase in the use of controlled substances.”

As many of you may be aware, Arlington, like many areas of the country, has seen an increase in the use of controlled substances. Over the course of the past year, APS staff worked closely with a number of county agencies to respond to this uptick and to ensure that our schools continue to be safe spaces for students and staff. One of the new measures that will be implemented to help minimize the presence of illegal substances in the schools is the use of the Arlington Police Department K-9 unit. Beginning later this month, the police will come to each of the high schools with the K-9 units to search for drugs. The searches will take place in the evening after students and staff have left.

APS has been communicating this information to families, and all high schools will make an announcement tomorrow (Thursday) morning. I wanted you to be aware of this initiative as I am sure students may have questions.

The drug dogs will only patrol high schools, not middle schools, according to APS.

At least one middle school principal downplayed the extent of the “drug problem” at her school. In an email sent to parents on Monday, Williamsburg Middle School principal Connie Skelton said the problem was limited to “a small cohort of students.”

I’ve had some questions about the “drug problem” at Williamsburg. I want to assure you that this is not a widespread problem, however, we do share your concern. In our school, there is a small cohort of students we are carefully following for drug related issues. If you have any information you would like to share with me, please give me a call.

Arlington Public Schools spokesman Frank Bellavia said the school system is taking measures to keep students safe in the face of a nationwide upswing in drug use.

“Substance abuse and opioid use is a growing problem both in our region and across the U.S.,” said Bellavia. “In collaboration with our law enforcement partners, we are taking steps to make sure that our students are safe and that our schools remain drug free. We also want to make sure that parents are aware and having conversations with their children at home.”