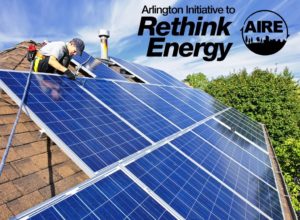 (Updated at 3:20 p.m.) Arlington County just announced that it has joined other counties, cities, businesses and colleges in signing an open letter pledging to meet the goals of the Paris Climate Agreement.

County leaders joined on Monday (June 5) an open letter to the international community and parties to the Paris Agreement entitled, “We Are Still In.” The letter promises that efforts to reduce greenhouse gas emissions will continue, regardless of federal policy.

“Arlington stands with communities across our nation and around the globe who recognize that climate change is real and that we must, both on the local and on the global level, meet its adverse effects with strong, effective action,” said County Board chair Jay Fisette in a statement. “Just as we joined the Compact of Mayors in 2015 and agreed to set goals for reductions in greenhouse gases, so do we join the effort today of local communities that are pledging to uphold the Paris Agreement, even if the federal government does not.”

The District of Columbia has also signed on to the pact and Virginia joined a similar state effort this week.

In light of President Trump’s decision, the County Board will consider a resolution at its June 17 meeting reaffirming Arlington’s commitment to combating climate change.

In a press release, the county touted its efforts already in the fight against climate change:

Arlington County adopted a forward-thinking Community Energy Plan (CEP) in June 2013, as an element of our Comprehensive Plan. The award-winning plan is a long-term vision for transforming how Arlington generates, uses and distributes energy. Its goal-setting and methods of achievement are consistent with the Mayors National Climate Action Agenda and the Paris Accord. Arlington’s CEP aims to reduce greenhouse gas emissions by 75 percent by 2050, and greenhouse gas emissions already have fallen 18 percent in Arlington between 2007 and 2015.

In 2015, Arlington signed the Global Covenant of Mayors for Energy and Climate, sponsored by the Compact of Mayors – open to any city or town in the world willing to meet a series of requirements culminating in the creation of a full climate action and adaptation plan.

In 2012, Arlington exceeded our goal of reducing government-wide energy usage by 10 percent, using the year 2000 as a baseline. Currently, we’re competing in the U.S. Department of Energy’s Better Buildings Challenge to reduce municipal building energy usage by 20 percent by 2020.

Our Arlington Initiative to Rethink Energy (AIRE) helps our community make smart decisions about energy and supports individual actions that improve and sustain Arlington’s quality of life. County government buys more than 30 percent of its electricity as certified green power and buys carbon offsets against 100 percent of its natural gas use. Arlington is home to Discovery Elementary, the largest “net zero energy” elementary school east of the Mississippi River.

At its meeting in June, the County Board will consider a resolution reaffirming Arlington’s commitment to combating climate change and to the goals of our Community Energy Plan.

Arlington will continue to work to make our County more prosperous, healthful, safe and secure through its efforts to rethink energy and protect the environment.

For more information about Arlington’s environmental initiatives and efforts to reduce energy usage and energy costs, visit the County website.