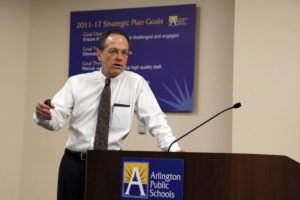 The Arlington School Board will consider a new contract for Superintendent Patrick Murphy, one year before his current deal expires.

According to a memo sent to her colleagues on the School Board by chair Nancy Van Doren, Murphy has requested a new four-year contract, effective July 1.

At tonight’s meeting, the Board will vote on whether to advance a notice of intent to renew Murphy’s contract as part of its consent items. If it passes, the contract would then likely be debated at the Board’s June 29 meeting.

The Superintendent has requested that his contract be replaced with a new four-year term, with some modifications, effective as of July 1, 2017. This memorandum provides notice to the Board, pursuant to Va. Code 22.1-60(C), that the Board may act upon this request at its June 29, 2017 meeting or thereafter, and a vote is tentatively planned for that purpose.

An Arlington Public Schools spokeswoman declined to comment further on the new contract and those modifications, except to say that the Board is “considering the renewal.”

“I know that the procedures for contracts of any type (personnel, construction, equipment, contractors, etc.) are private until the contract has been finalized and approved, so terms of this (or any other) contract would not be public until it is finalized and approved by the Board at some point in the future,” the spokeswoman said.