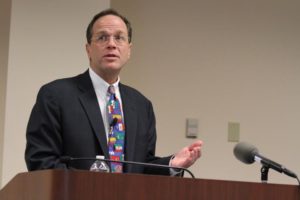 (Updated at 2:00 p.m.) Arlington Public Schools Superintendent Dr. Patrick Murphy is set to spend the next four years at the helm of the growing school system.

The Arlington School Board, in a surprise move not included in the board’s scheduled agenda, approved a new four year contract for Murphy this morning by a vote of 4-1.

All five School Board members praised Murphy’s job performance, in spite of criticism of his tenure from some parents who view his efforts to keep the APS budget in line — while dealing with an expanding student population — as arbitrary and poorly-communicated. There were no public speakers to weigh in on the contract renewal at the morning meeting.

“The trajectory is very much in the direction it should be going,” retiring Board member Sally Baird said of Murphy’s impact on the school system.  She called Murphy and his leadership team the “core of the success of the system.”

Baird and other Board members said stability in leadership is a key component to the success of school systems.

Newly-elected School Board Chair James Lander cast the dissenting vote. He said the off-cycle contract renewal (Murphy’s current contract is not up until 2016) could set a bad precedent.

“My objection on this isn’t based on merit or performance, it’s based on process,” he said. “I would gladly consider a contract extension in the future. We are stewards of the taxpayer dollar… the expectation is that this would be done a year from now. I believe that granting an extension in an off year, without prior discussion… doesn’t align to our commitment to transparency.”

Board member Abby Raphael, however, argued that the Board typically does not hear public comment on personnel decisions.