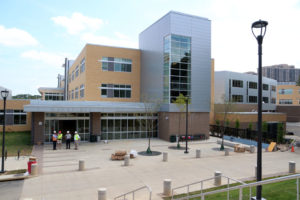 (Updated 11:30 a.m.) Almost 300 Wakefield High School students had to re-take a Standards of Learning test after staff discovered what they described as an “irregularity” during testing.

A letter to parents from Wakefield principal Chris Willmore said that on May 30 and 31, students had to move examination rooms after two-and-a-half hours of taking a test that does not have a time limit.

But, Willmore said, some students began talking while moving to the new testing area. Willmore said staff immediately reported what happened to the Virginia Department of Education, but a VDOE spokesman challenged that assertion and said it was reported after regular business hours on June 8. VDOE decided earlier this week that students had to re-sit.

Willmore’s full letter is below.

I am writing to let you know about an irregularity that we experienced during Standards of Learning (SOL) testing a week ago that affects your student. As you may know, some SOL tests have no time limits which means students may take as long as they need to complete the test. During SOL testing on May 30 and 31, some students needed more than the two and a half hours that had been scheduled in the rooms where they were taking tests. Although the state allows schools to move students to another location when this occurs, we experienced some talking among students while they were moving. Because talking is not allowed when students are regrouped, the APS staff who were serving as the Wakefield testing monitors immediately reported this “testing irregularity” to the APS Office of Planning and Evaluation staff who alerted the Virginia Department of Education (VDOE) as required.

Although this was reported to VDOE a week ago, we did not learn until yesterday afternoon that the state has decided to void all of the student scores for these tests because of the irregularity. This means that your student is among the group of students who will need to retake an SOL test.

The SOL retakes will be given on Thursday and Friday this week. Students will be informed by their classroom teacher today about the retake. For those students who have a final exam during the time when they need to retake the SOL test, they will be excused from their final exam and their final grade will be calculated using the fourth marking period grades. Also, because Friday is an early release day, for those students who need more time, regular transportation will be available in the afternoon at our normal dismissal time.

Finally and most importantly, I want to sincerely apologize to all of our Wakefield students and families for this error. We have had an amazing year with great progress and achievement and I regret that we have experienced this mistake during our administration of some tests this year. Please know that we will do everything possible to support our students and help them finish the year successfully.

In a second letter sent Thursday, Willmore took full responsibility, and urged parents not to contact VDOE with their concerns, but him.

Yesterday, we learned that Wakefield parents and staff have been contacting VDOE about the need to retest some students.  I need to urge you again to instead direct your concerns to me.  For those I have already spoken with, I appreciate the time you have taken to share your thoughts and feelings about what has happened.

In the end, Wakefield is required to follow the procedures set in place for all schools by the state and, unfortunately, that did not happen this year. I want to assure everyone that we will implement a corrective action plan so we learn from this year’s testing difficulties and can ensure that this type of irregularity does not occur again.

An anonymous tipster said students that needed to re-take the tests had been put at a significant disadvantage, and they called on the Virginia Department of Education to let their scores stand.

“They’ve been away from the subject for two-three weeks, putting them at a distinct disadvantage,” the tipster wrote. “Someone should put pressure on the state to let the scores stand.”

The APS spokeswoman said an irregularity during a test can be defined in any number of ways, and that staff are trained to report anything that happens.

“[A] ‘testing irregularity’ is anything that happens outside the norm,” the spokeswoman said. “A student getting sick and throwing up during the test is an ‘irregularity’ and test scores are thrown out by the state for the class. Same thing if there’s a fire alarm or power outage. We have monitors in all schools during testing who must share anything that occurs with our head of testing and, then our head of testing reports that to the state.”