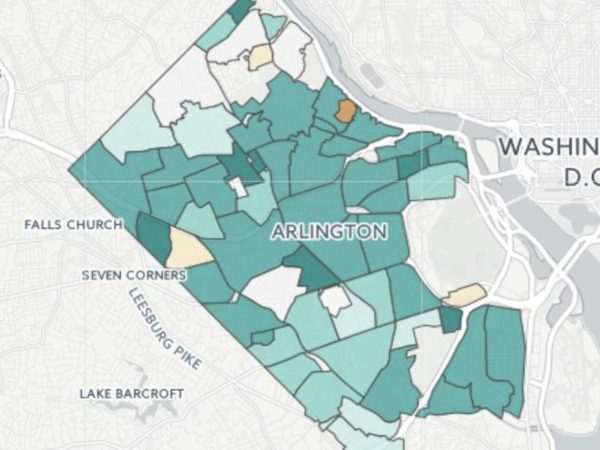 Average house prices in Arlington County have recovered to or exceeded what they were before the 2008 financial crisis, except in eight neighborhoods, according to new findings.

Randy Smith, a senior fellow at the D.C. Policy Center and a GIS specialist at Hood College in Frederick, Md., found that on average, houses in the following neighborhoods have gone down in value since 2007:

All other neighborhoods have seen average home values either reach or exceed their pre-crisis levels, with the likes of Buckingham, Madison Manor, Glebewood and High View Park seeing increases of more than 50 percent on average.

On average across the county, property values have steadily ticked upwards. Earlier this year, the county said values rose 2.6 percent over their 2016 levels.

In an interview, Smith said the slight downward trend for some home values could be due to a lack of sales in those neighborhoods, or a lack of amenities that make them an attractive and convenient place to live in.

“Just because there’s not much to do and not much local resources: you have to drive further for grocery shopping, for any retail that you would have to go and buy normally,” he said. “Overall, I would think that the time spent having to drive to do anything would contribute to that part.”

Smith also found that foreclosures on county homes peaked during the financial crisis, but since then have stabilized with the local economy. 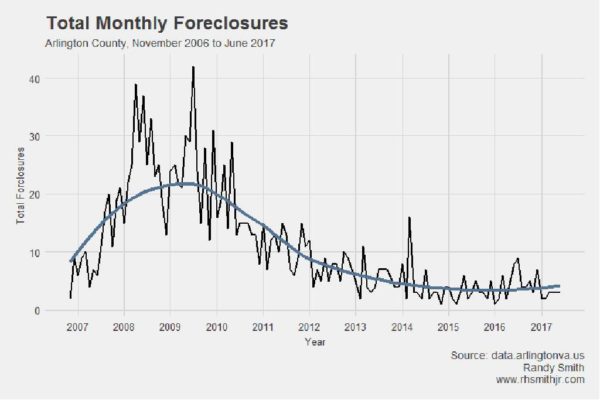 “It was fairly stable through that time period to begin with, as it wasn’t as affected as the rest of the country,” Smith said. “I’m guessing that’s why it wasn’t any crazy numbers per month for foreclosures, but I’m guessing people are more encouraged to start buying again in the area.”

Smith said he does not expect a slowdown in increasing property values in Arlington, due to the relative strength of the local economy and various other factors that make it attractive.

“There’s a fairly good job market, there’s a lot of people that want to move there, it’s close to D.C., good transportation,” Smith said. “Maybe that’s what’s influencing it…But I don’t see any reason that sales prices aren’t going to stop increasing in the near future.”

Smith’s interactive map of home value changes in Arlington, sorted by neighborhood, is below (after the jump).