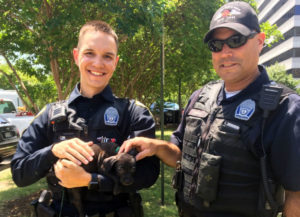 A pair of Arlington County Police officers rescued a dog from inside a parked car yesterday morning (Wednesday) in Courthouse.

The officers responded just before noon for reports of a dog crying inside the vehicle parked at the county’s surface parking lot, on the 1400 block of N. Courthouse Road. They removed the dog from the car and handed him over to animal control.

A police spokeswoman said it’s up to animal control officers whether to charge the dog’s owner with a crime. The Animal Welfare League of Arlington did not respond to requests for comment.

At approximately 11:46 a.m. on June 28, the emergency communication center received a report that there was a dog crying inside a parked vehicle in the 1400 block of Courthouse Road (this is the surface parking lot located across the street from the police department). The caller advised that the windows were slightly cracked but the dog appeared in distress. Responding officers were able to rescue the dog and transfer him to the care of the Animal Welfare League of Arlington.

Animal control officers from Animal Welfare League of Arlington are charged with the enforcement of all Virginia state and Arlington county laws pertaining to the welfare, care, and control of all domestic and wild animals. They will investigate to determine if any charges are appropriate.

Even on relatively mild days during the hot summer months, children or animals should not be left unattended in a car, regardless of whether the windows are cracked, officials say.

Even on less humid days the temperature in your vehicle quickly rises. Officers rescued this puppy from a parked vehicle in Courthouse. pic.twitter.com/ZkoHLSqrtA